â€œIndustry benchmark, the industry's best, free to join, sales back.â€ Dongguan Huachen Optoelectronics Technology Co., Ltd. (hereinafter referred to as â€œHuachen Companyâ€) attracts eye-catching advertisements, attracting businessmen from all over the country to join the â€œKM Kongmingâ€ LED energy-saving lamps. Sales. However, on May 18th, due to doubts about Huachen's products, "goods are not right", the quality of "potholes", dozens of Huachen company agents from the country gathered in Dongguan, pointing to the company suspected of false propaganda, contract fraud. The Dongguan Municipal Administration of Industry and Commerce reported that since October last year, the bureau has accepted more than 50 complaints about Huachen Company, involving more than 1 million yuan; the registration application for the â€œKM Kongmingâ€ trademark has not yet obtained the trademark registration certificate; The company's business scope is research and development, production, and sales, and there is no "joining". At present, the Dongguan industrial and commercial and public security departments have been involved in the investigation.

The contract signing date is messy
On June 18, 2011, Mr. Cao signed the franchise contract of the general agent of Hebei.

"Their company claims to be free to join, but in fact must first pay the market deposit to join." Mr. Cao said that he paid a "guarantee" of 238,000 yuan. According to the commitment of Huachen Company to â€œsell back to the originalâ€, for example, if the purchase price is 20,000 yuan, the company will return 10% of the â€œguaranteeâ€ of 2,000 yuan. â€œBut the price of their products is generally higher than similar products in the market and it is difficult to sell. The same product, others buy 20 yuan, but they have to sell 40 yuan." Mr. Cao said that according to regulations, he wants to sell 2.3 million products in order to return his 238,000 "market margin."

In the sales process, Mr. Cao found that many products were â€œnot rightâ€. â€œThe products that are purchased are obviously different from the styles and packaging of the company's distribution samples.â€ Mr. Cao said that he repeatedly asked the company to return the goods, but the company has always ignored him. In addition to the price is higher than the market's similar products, the company's advertising and the actual product features are very different. 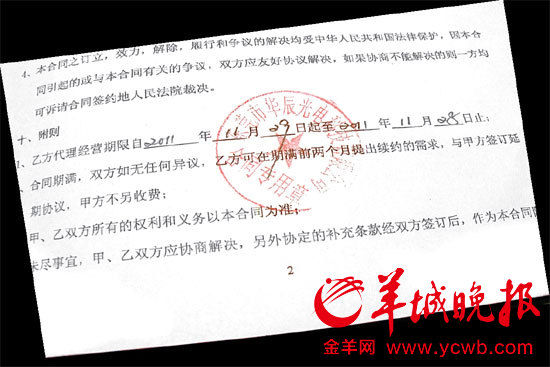 In the interview, dozens of agents from all over the country reflected the same situation as Mr. Cao.

Unreasonable, ready to sue them
On May 18, the reporter went to Huachen Company in Hongtu Road, Dongguan. The companyâ€™s door was posted with a notice of annual leave until May 31. There are only three staff members in the company. A man surnamed Yang, who claimed to have been in charge of after-sales service for 10 days, said that the person in charge of the company was on a business trip. The man denied that the product had quality problems and there was no service quality problem. If there were any leaks, it was also an "individual phenomenon." As for the date of the contract, it was only the negligence of the staff. The man also said that these agents "unreasonable troubles" have affected the company's normal production and operation, affecting the company, and said that they are preparing materials to prosecute the troublemakers. 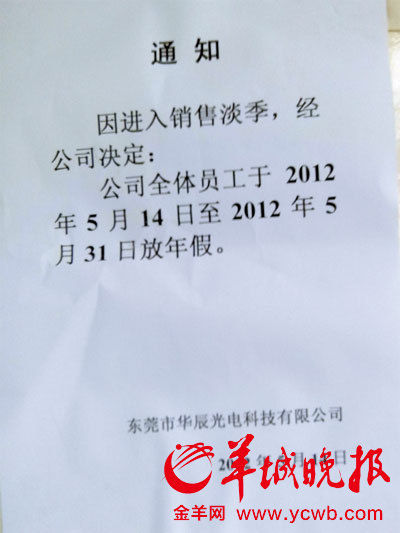 Posting the annual leave notice in front of the factory

The product has not yet obtained the trademark registration certificate.
Yesterday, the reporter learned from the Dongguan Municipal Administration of Industry and Commerce that Huachen Company was established in 2010. Its business scope: research and development, production and sales of energy-saving optoelectronics, lighting products, general equipment, hardware and electrical appliances. On March 15, 2012, the industry and commerce department had imposed administrative penalties on illegal business operations for the production and sale of unqualified electric hot water taps.

The reporter also learned that since October last year, the industrial and commercial departments have accepted more than 50 complaints about Huachen Company, involving more than 1 million yuan. More than 30 mediation successes, Huachen Company refunded the complainant's margin amount of about 500,000 yuan.

As for whether the company has false propaganda and suspected contract fraud, the Dongguan industry and commerce and public security departments have jointly intervened in the investigation.

The Main Distribution Frame is offered with compact size from 10pair (for 1 piece 10 pair disconnection krone module) to 2400 pair. For the installation, there are surface mount, floor standing, pole mount three ways for different application. Outdoor and indoor type is on option. Typically, the outdoor box is equipped with an airtight and watertight cover that allows for easy access to the interior components, making it easy to inspect and replace those components when and as necessary.