In August 2016, I bought a 3A2000 open source computer host through the Loongson Club. When I clicked the order, I felt a little bit in my heart. It felt like I was in a dream. After the order was placed, the person in charge of the group purchase network immediately contacted me and waited with great excitement. As a fan who paid attention to Godson for 10 years, I finally wanted to use the domestic Loongson computer to complete a long-cherished wish. I couldn't wait after arriving. Unpacking, I found that the chassis is not big, similar to the square dance on the sound, I also sent a WeChat circle of friends to let friends guess what, the results are guessed within 24 hours, such as: microwave oven, stereo, charging treasure.. .., is not guessed is the Loongson computer host, and sure enough high-end atmosphere! View the configuration after booting, personal feeling is very high in the Taiwan machine, has exceeded the configuration of the host I am using, solid state drive, 8G memory, also presented a U disk.
Unpacking the drawing: 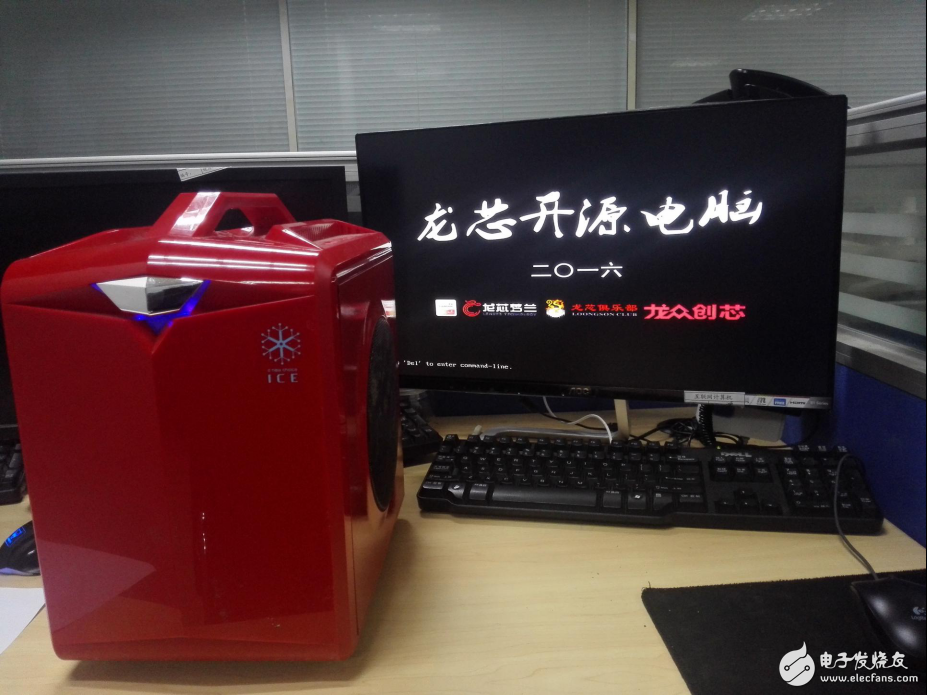 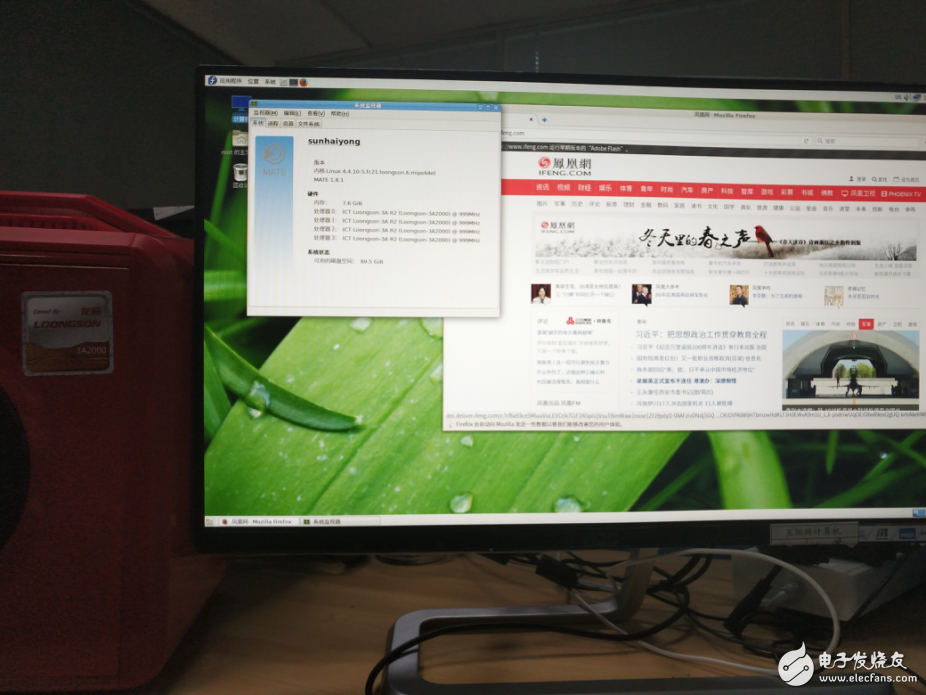 The command line looks at the system architecture and system operating system, and is checked as a 64-bit system of fedora 2.1 on the mips platform. If you want to use a better user desktop experience, you can also ask the club to use the deepin version of deepin, not only the interface is close to the Apple operating system, but also the desktop software is more perfect, and there is a software store to install software directly like the Apple store, mainly The latest version of QQ has been ported.

The command line checks the CPU. The following figure shows the core of four 999Mhz frequencies. 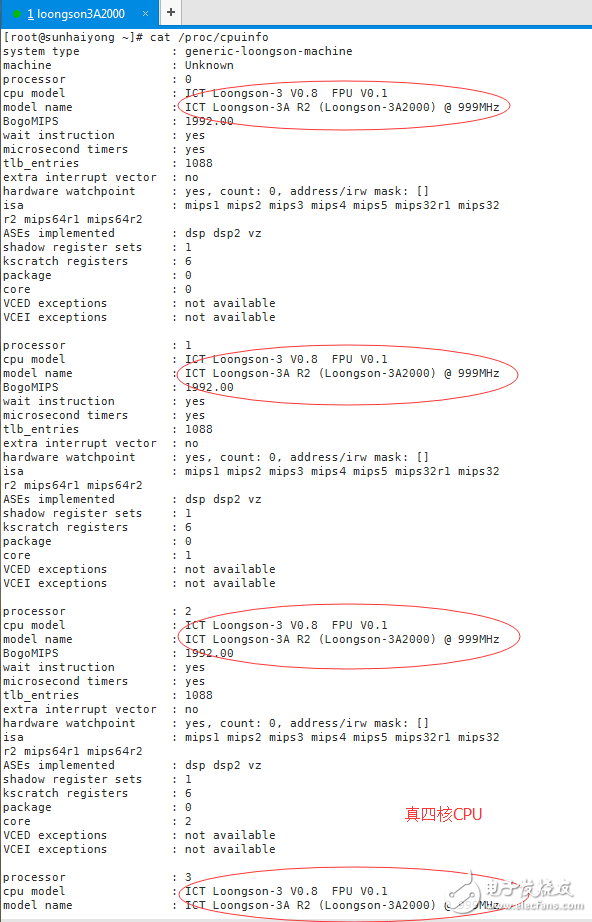 Use the ifconfig command line to check the status of the NIC. 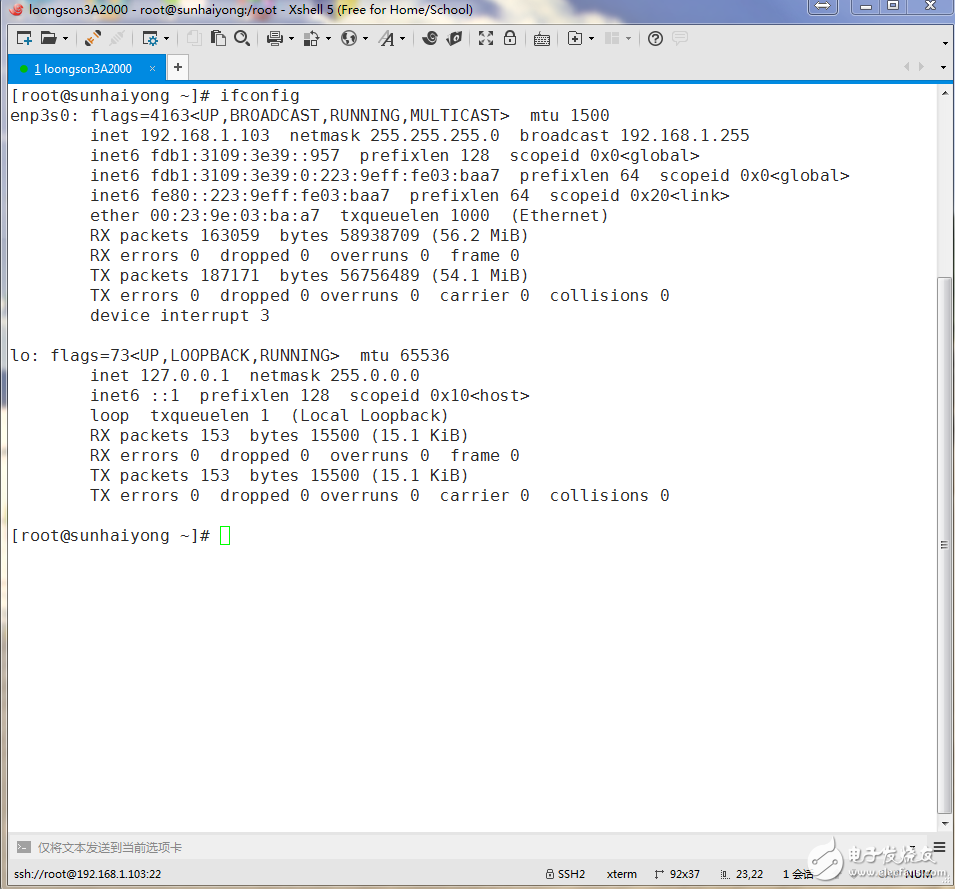 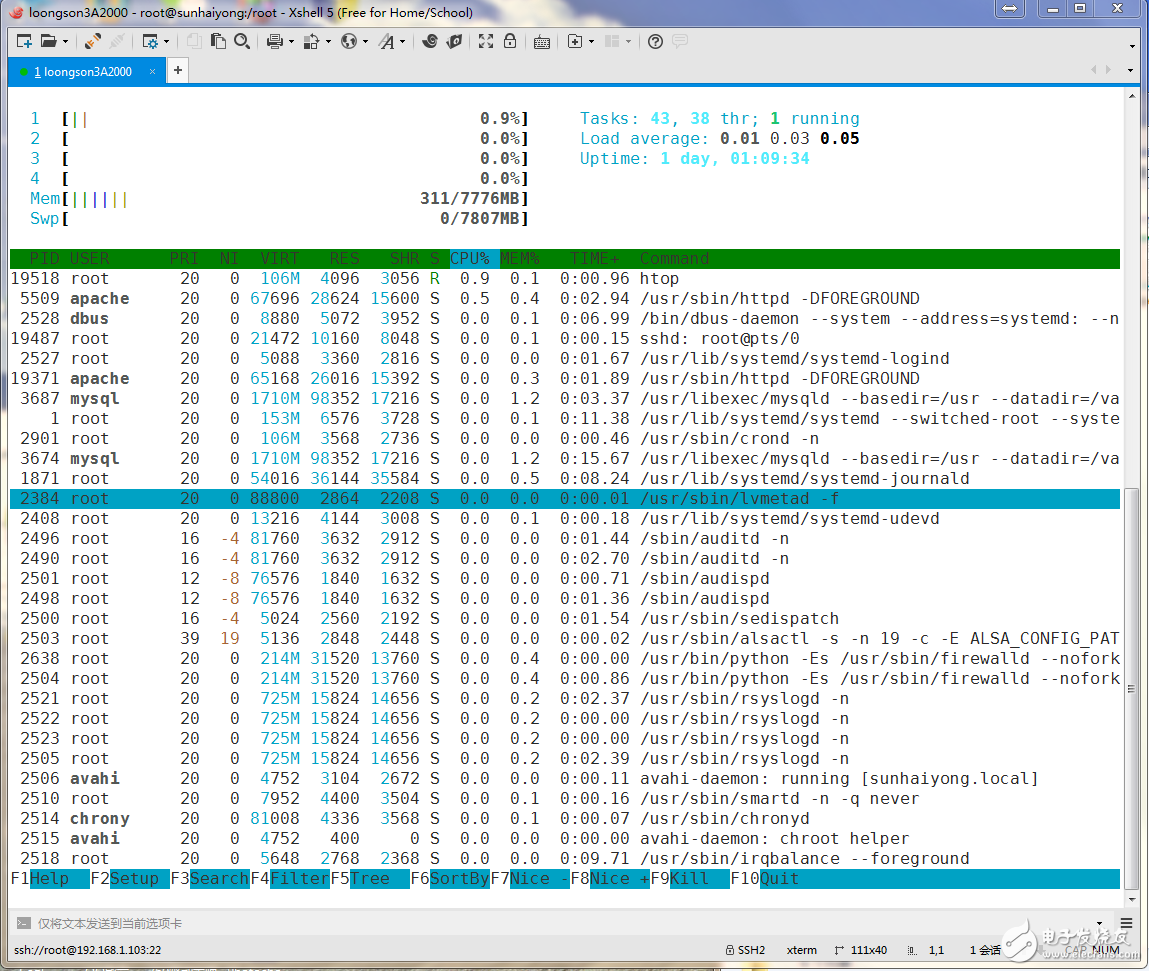 First, as an office host experience.
Although it is used for server use, I am still curious to play some. I have experienced the office software WPS and web version of QQ, WeChat and Kodi video playback. After the initial test: libreoffice in the opening of documents, spreadsheets and slides fast, to meet the office is completely no problem, the only deficiency is that the font is not enough, it is recommended that the system should be accompanied by the default imitation of the Song. Since Tencent does not have the latest version of QQ support, log in to the web page to log in to Tencent's web version of QQ and WeChat can be used normally. Online video playback software I chose the kodi recommended by the "Godson" official website, use the command line installation command: sudo yum install kodi. A one-line command was successfully installed. After the installation was successful, the domestic media library was selected. I can play the domestic series, I downloaded the Sina video library plug-in on the Internet. For details on the use of kodi, please refer to the description of the website of the website. http://
Therefore, it can be said that the Loongson has fully satisfied the office performance. If combined with entertainment, please recommend installing the most beautiful Linux system in the development interface of the Chinese people. The deep core version of the deepin version will support more.

Use the libreoffice diagram on the Godson: 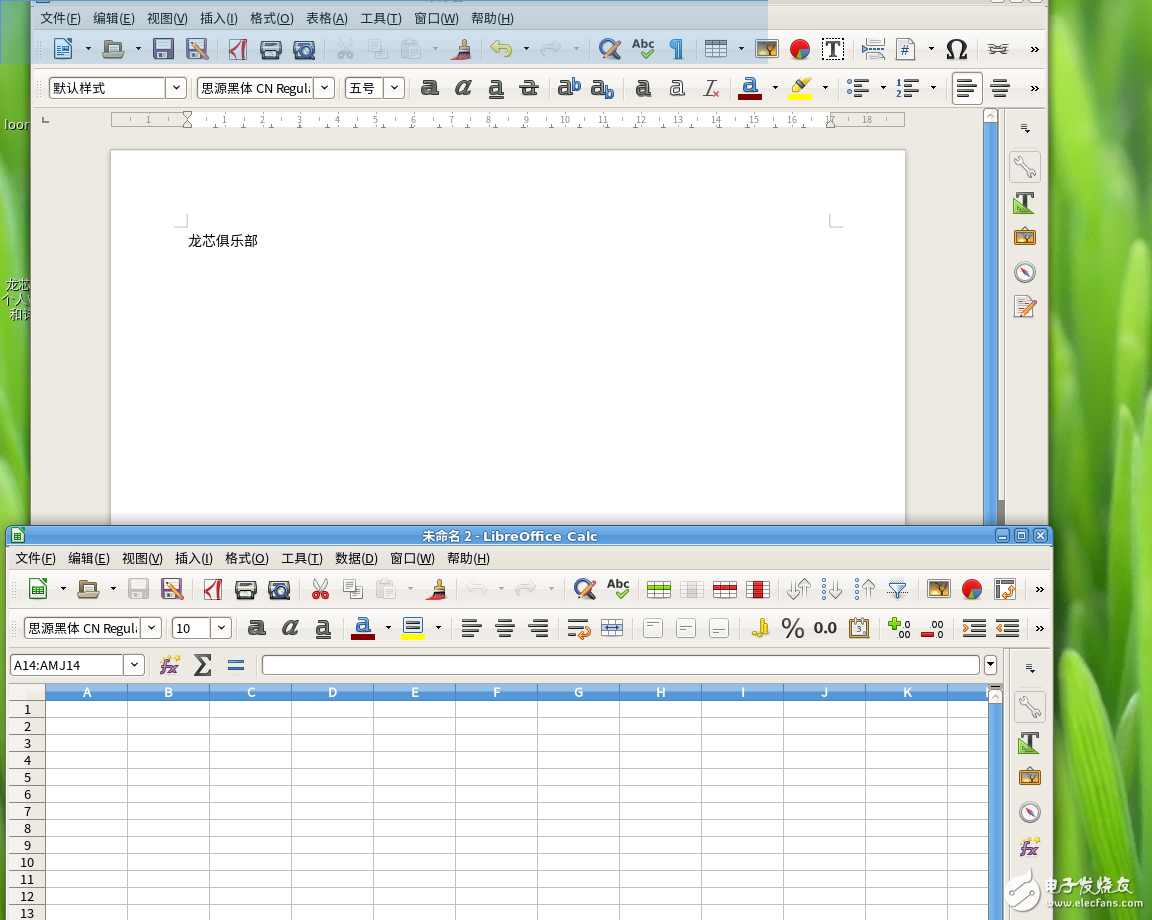 Use the QQ drawing on the Godson: 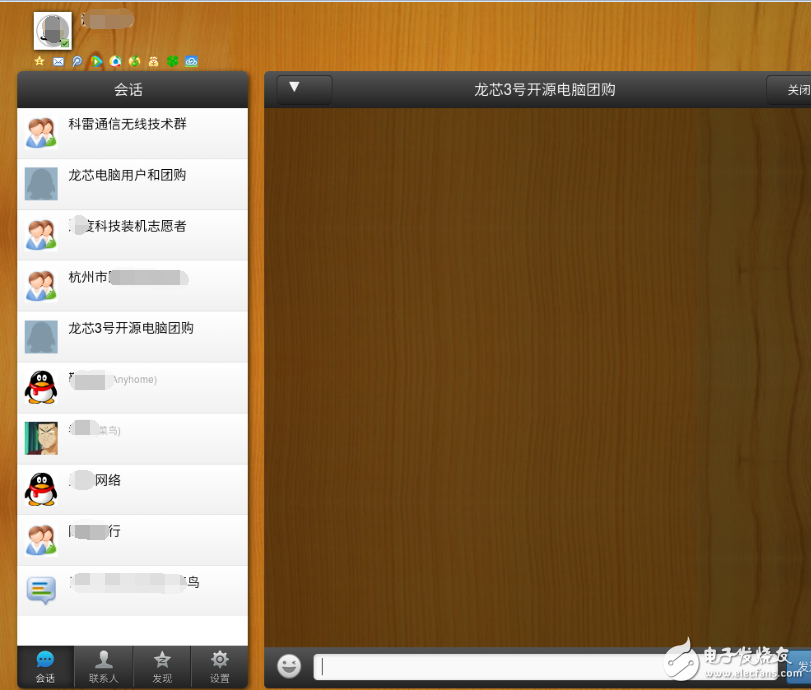 WeChat drawing on the Godson: 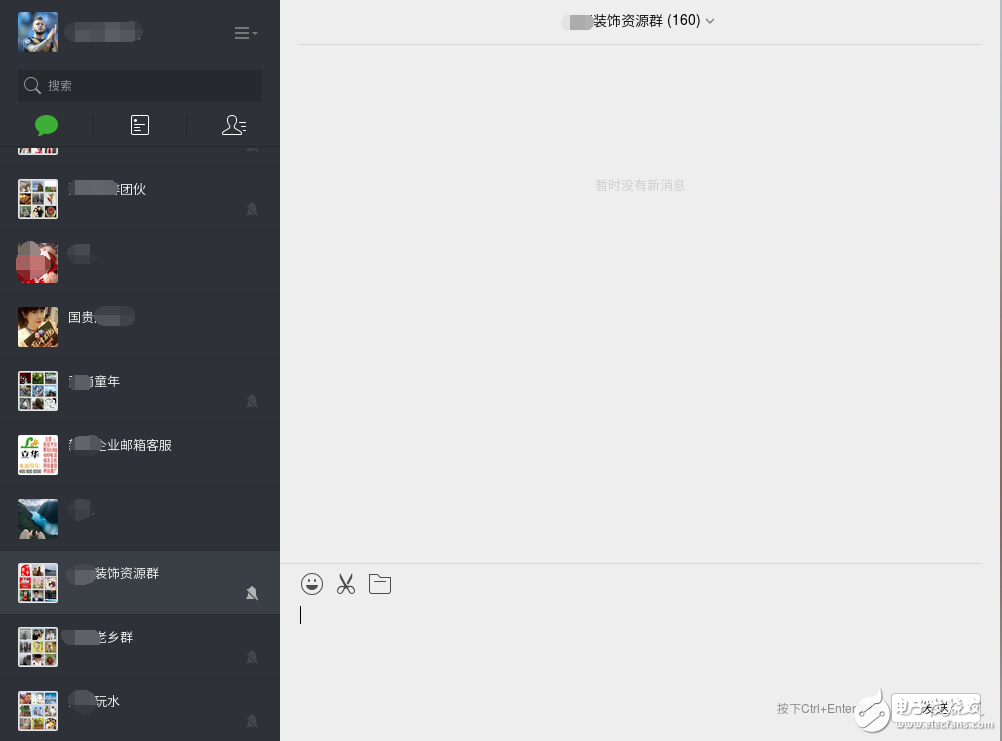 Use the Kodi drawing on the Godson: 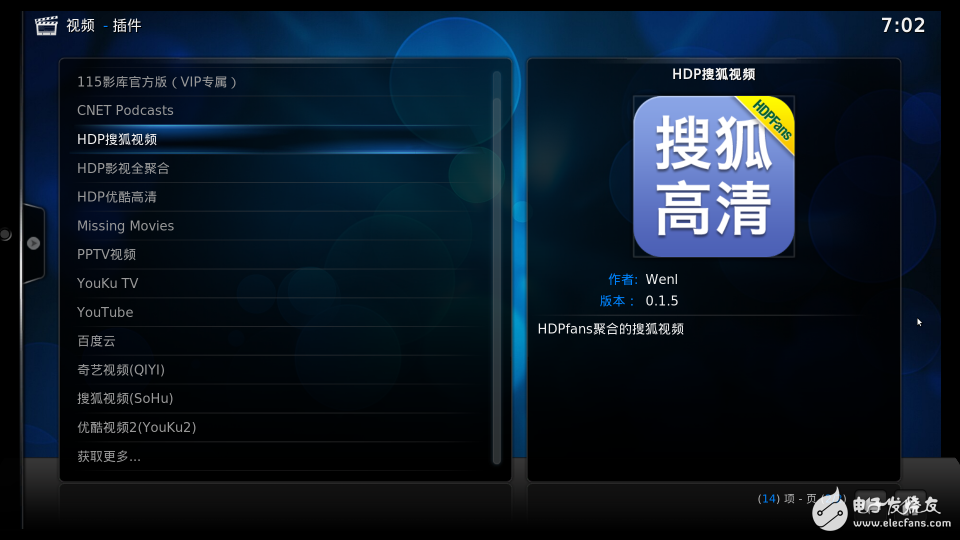 After installing mysql, you may be surprised to find that the prompt is not mysql but MariaDB data, MariaDB data is stronger than mysql compatible, data query speed is faster, and some mysql commands and settings are compatible with MariaDB data operations.
MariaDB data introduction: MariaDB database management system is a branch of MySQL, mainly maintained by the open source community, using GPL license MariaDB is fully compatible with MySQL, including API and command line, making it easy to become a substitute for MySQL. In terms of the storage engine, XtraDB (English: XtraDB) is used instead of MySQL's InnoDB. MariaDB was led by MySQL founder Michael Widenius (English: Michael Widenius). He sold his company MySQL AB to Sun for $1 billion. Since then, SUN has been acquired by Oracle. The ownership also falls into the hands of Oracle. The MariaDB name comes from the name of Maria, the daughter of Michael Widenius.
MariaDB is up to version 5.5 and is in accordance with the MySQL version. Therefore, people using MariaDB5.5 will learn all the features of MariaDB from MySQL 5.5.
Starting from the 10.0.0 version released on November 12, 2012, it is no longer in accordance with the MySQL version number. Version 10.0.x is based on version 5.5, plus features from MySQL version 5.6 and new features developed in-house.

3, install apache http service , provide WEB service <br> The command line is as follows:
Sudo yum list http* #View http software installation package
Sudo yum install httpd.mips64el httpd-devel.mips64el #Select to install the appropriate service
Sudo yum install php-ZendFramework-Db-Adapter-Pdo-Mysql.noarch #Install the pdo component, tested and supported the looseson architecture
/var/ #ç½‘é¡µæ›´ç›®å½•
/etc/httpd/conf/ #è®¾ç½®ç›®å½•
Syste mctl enable httpd.service #System starts Apache at boot time
Found problems, PHP code is not supported when writing When embedding the display, be sure to follow the specification as:
4. Command line startup without interface <br> Since it is used as a server, there is no need to use a graphical operation interface. Using a pure command line startup can save memory and CPU resources.
Because there is no /etc/initab file in Fedora, we can't easily set its runlevel target from here, but Linux gives us a powerful tool syste md, we can use system to link the default startup level, so let's get started!
The following describes three methods:
(1) Delete the target link and create a new symbolic link (started from the command line)
Ln -sf /lib/syste md/system/mulTI-user.target /etc/syste md/system/default.target
(2) Start from the graphical interface and replace mulTI-user.target with graphical.target.
Ln -sf /lib/syste md/system/graphical.target /etc/syste md/system/default.target
Code interpretation
The ln command is a command to establish a link between files. The default is hard link. We use a symbolic link (symboli link) to create links for files in different file systems.
-s create symbolic links
-f delete existing link with the same name

After installing php successfully,
In the case of no graphical interface, the command line is turned on, the resource is occupied: 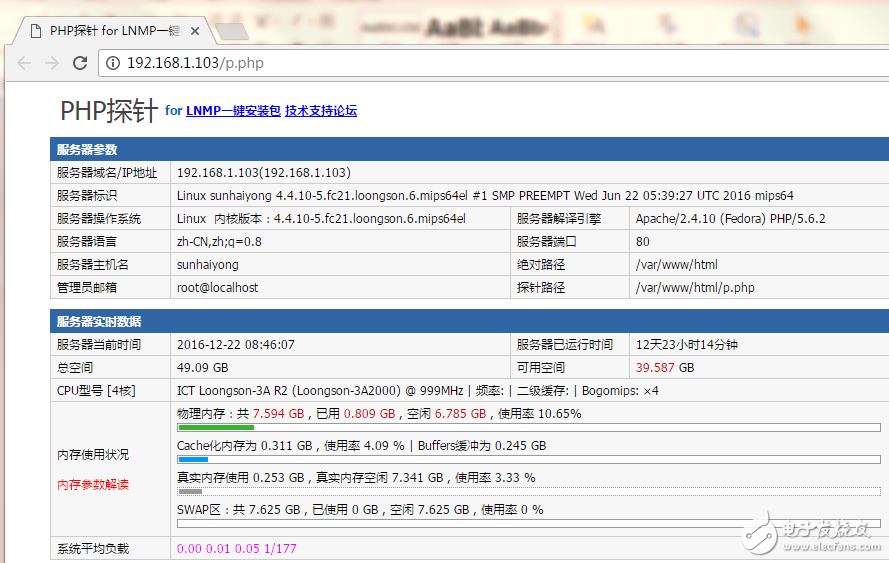 In the case of a graphical interface, the system resources of the 17-day boot, due to more software I open, the memory is occupied within the normal range. 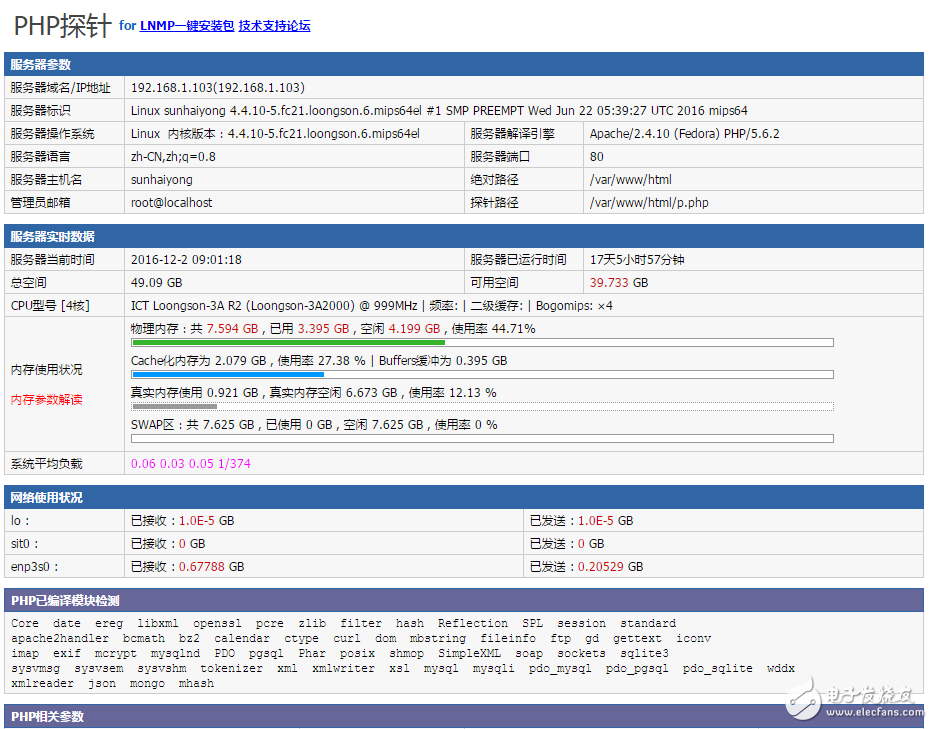 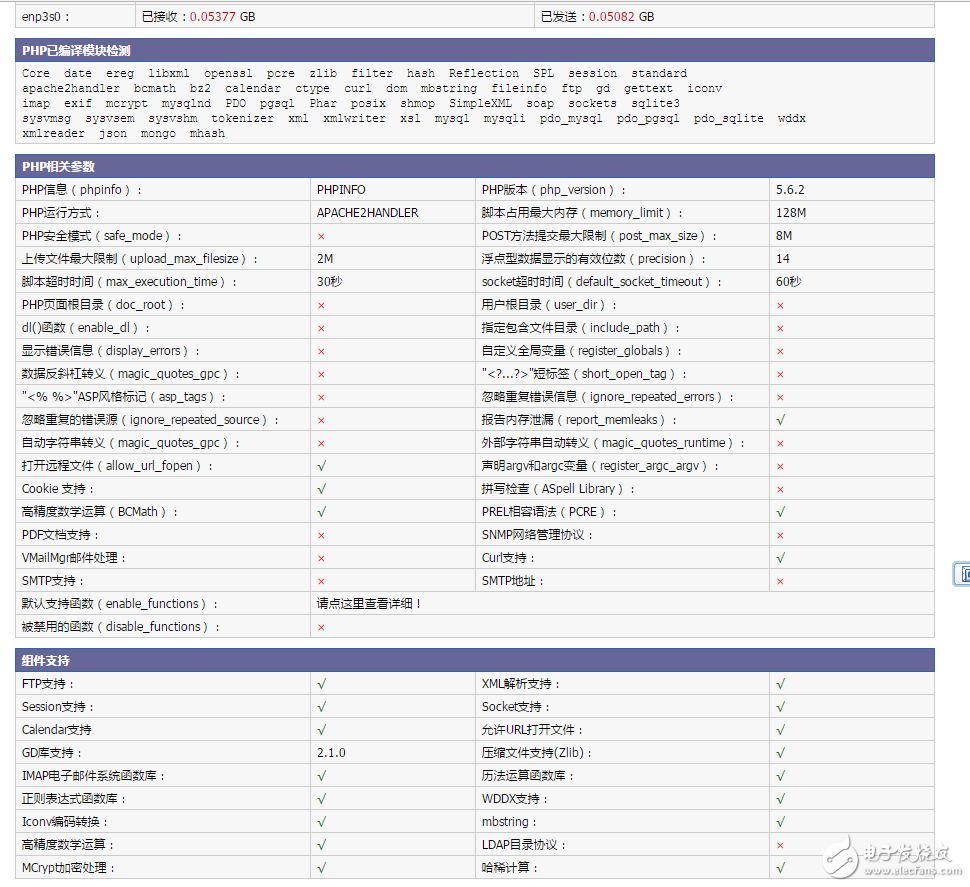 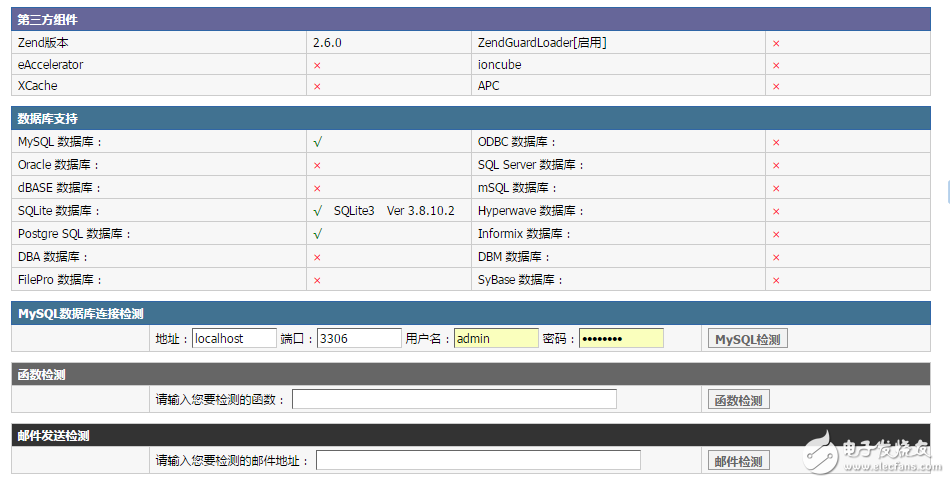 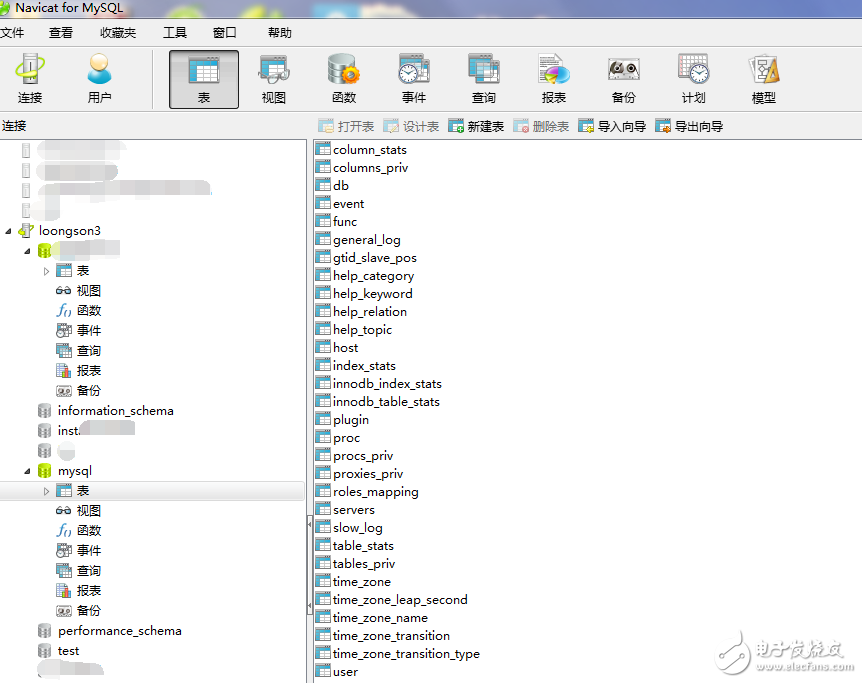 In the 3A2000 server to build a general ecshop demo first download the UTF8 source code in ecshop official website http://yunqi.shopex.cn 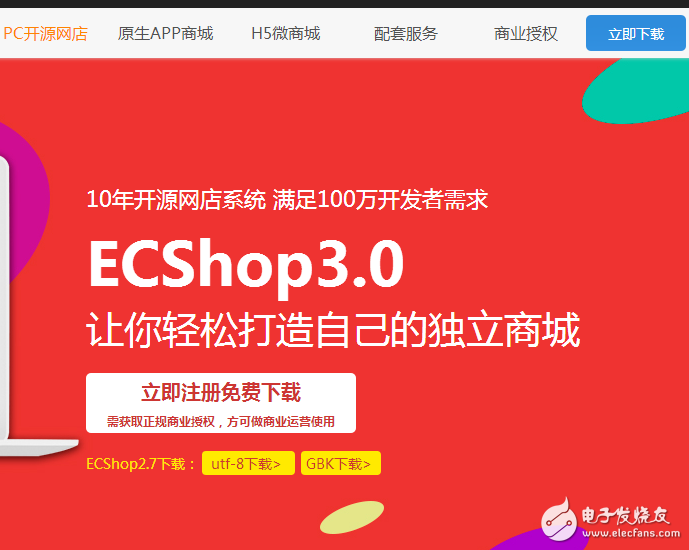 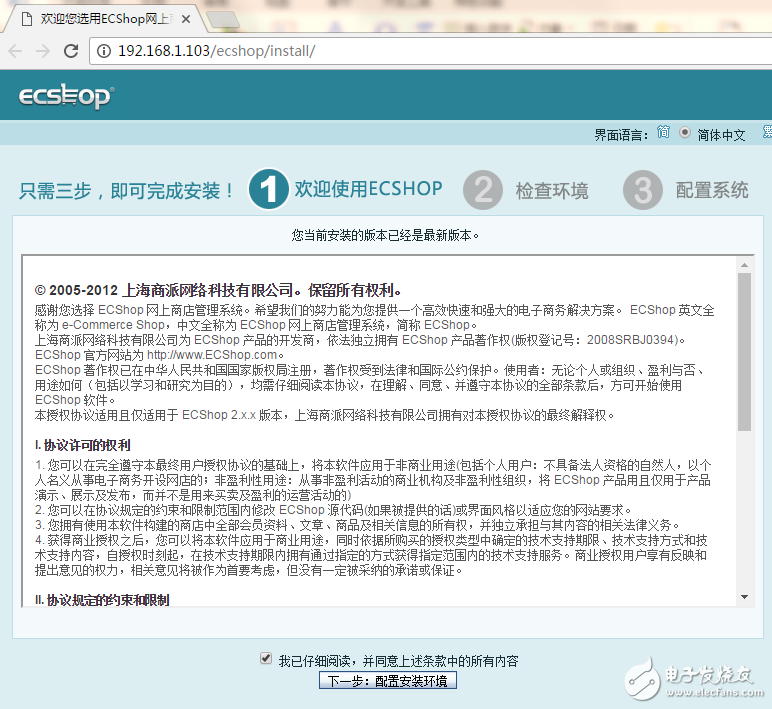 Create a new database on the mysql of Godson 3A2000 for installing ecshop. I created a new database named ecshop here, set the character set to UTF8, and then install the interface to the next step: 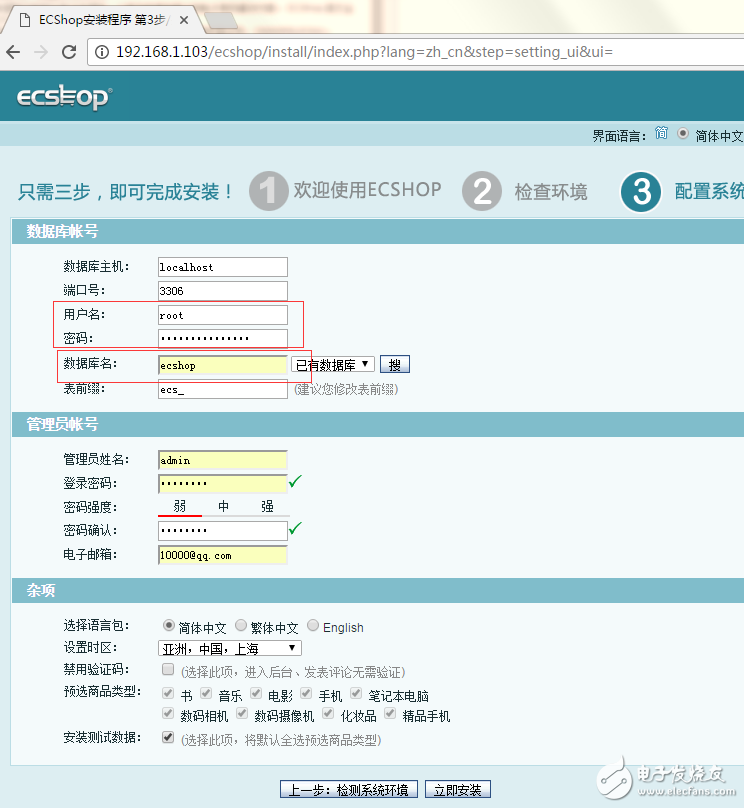 After the installation is completed, enter the home page, the operation is stable, and the click response speed is fast. 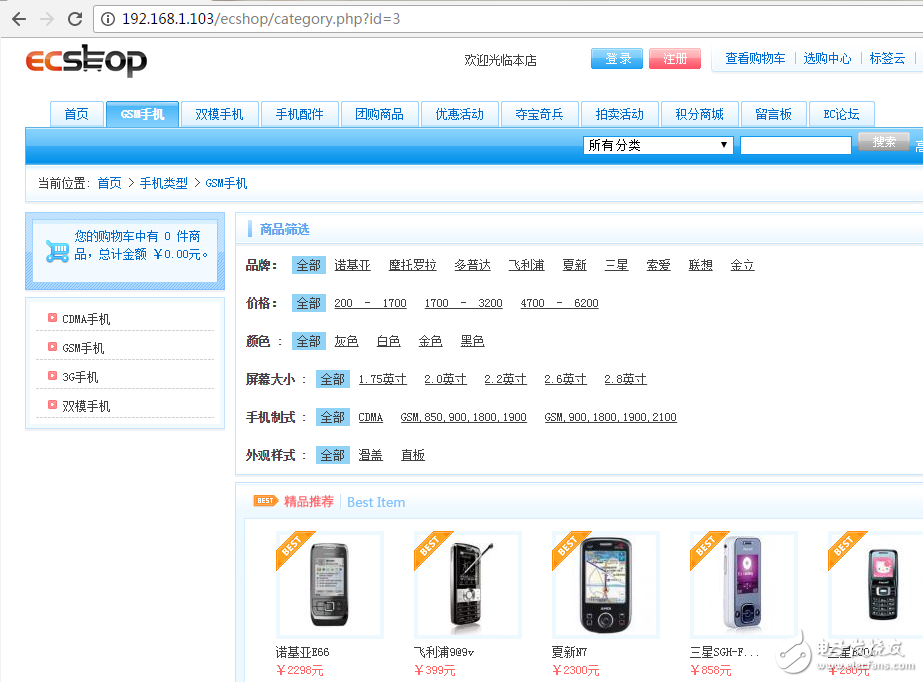 Through the trial of the domestic Godson CPU 3A2000 host, first say the graphical interface, giving me the deepest feeling is stable! I operate the graphical interface system, did not find the CPU due to restart, crash, because the system problem restarted the crash did not happen, but the application execution error occurs, which is very common on Linux systems, and CPU It doesn't matter, this is the ecological problem of domestic software. It is reported that Wuhan Shenzhidu Company has also become a strategic partner of Godson. In the deep new system, it supports the Loongson CPU. It is very much looking forward to the trial of the system. The software installation of deep linux is very user-friendly, and the installation of the original linux version of NetEase cloud music, 360 security TV, WPS, etc., all implement a software store installation similar to Android, very convenient. Secondly, the focus is on the experience of my web server as php. I have monitored it through the system software. It has never been restarted after booting. Under normal working conditions, all kinds of services are opened smoothly, and the Linux system installed on the intel platform does not. The difference, so it can be said that at the server operation level, the domestic Loongson CPU replaces the Intel server of the Intel series in terms of compatibility and ecosystem. Because the commonly used dependencies, plugins, and components have been ported in the source, it is very convenient to compile and install directly using commands. I use a self-controllable domestic Loongson server to deploy web sites in commonly used companies, schools, and government agencies because I am fully qualified. On the one hand, it is good in stability. On the other hand, the use of domestic CPU is no longer worried about the hidden dangers of overseas products that may reserve backdoors, which greatly improves the security of the entire system and the ability to resist network attacks. Towards a small one said that the security of the system of this unit has been improved, and it is said that it is a big addition to the national network information security construction!

Solar mobile Power Bank is a new type of power source that converts solar energy into electric energy and stores it in a battery, and at the same time has a mobile nature. The storage battery can be any form of power storage device, which is generally composed of three parts: solar photovoltaic cell, storage battery, and voltage regulating element.
With the energy crisis and the deteriorating environmental problems caused by petrochemical fuels, people are paying more and more attention, and the current digital products are becoming more and more popular. Solar mobile power is developed under this background.