The 125W Class D subwoofer power amplifier circuit designed with the LM4651 and LM4652 is shown in the figure. The amplifier has an output power of 125W at total harmonic distortion THD=1%, a load impedance of RL=4Î©, a maximum level of input signal Vin(rms) of 3V, an input signal bandwidth of 10 to 150 Hz, and an ambient temperature of 50 Â°C. The power supply voltage is Â±20V.
The LM4651 in a 28-pin DIP package is a PWM control/driver IC with built-in oscillator, PWM comparator, error amplifier, feedback amplifier, level shifting and high-side drivers, low-side drivers and undervoltage, overtemperature, short-circuit and overmodulation protection circuits . The LM4652 is a half-bridge power MOSFET IC in a TO-220 package with 15 pins (6, 8, 9, {11}, {12} pins not connected). The breakdown voltage of the four MOSFETs is V(BR)DSS=50V. The drain current ID = 10A, the on-state resistance RDS(ON) = 200mÎ© (typ.), and the turn-on voltage VGS(th) = 0.85V (typ.).
The oscillator frequency fosc = 1 x 109 / (4000 + Rosc) in the LM4651, where Rosc = R6 = 3.9 kÎ©, then fosc = 125 kHz. The input audio signal is input to the error amplifier with a gain of 7î€5V/V (ie, 17î€5dB) via C1, R1, and 10 pins. The half-bridge switch output on the IC27 pin and the {15} pin is filtered by the RC filter and fed back to the {14} pin of IC1. The {19} pin is outputted by the internal feedback measuring amplifier and then the pin 10 is output from pin 9 to provide the error amplifier. A single-ended feedback signal. The audio input signal is compared to the triangular wave generated by the oscillator, and a square wave pulse having a duty factor proportional to the input audio signal level is generated at the output of the PWM comparator to drive the power MOSFET in IC2. The switching output of IC27 pin and {15} pin is low-pass filtered by L1, C16 and L2, C17 to drive the speaker.
The resistor R4 on the IC1{18} pin is used as a short-circuit current limit. When R4=100kÎ©, the short-circuit current level is not lower than 10A; the resistor R5 on the {17} pin is used to set the dead time; the capacitor C9 on the {24} pin is used to set the start delay time (1 second) When the {13} pin (STOBY) is placed at logic "1" or 5V, the standby function is executed, the pulse width modulation is stopped, and the power switch in the LM4652 is turned off, which consumes only a very low current. As long as the junction temperature of IC2 reaches 150 Â°C, the output of the 4-pin is fed back to the {12} pin of IC1 to perform the thermal shutdown function. 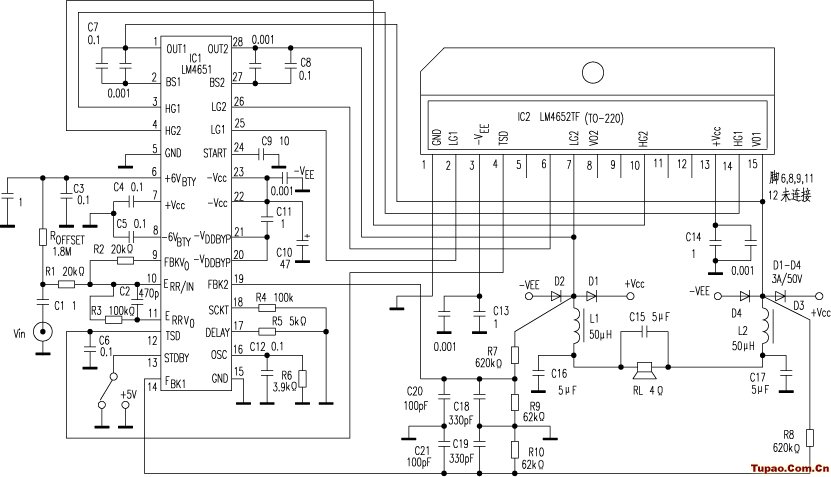 Mass  PCB Assembly =  Mass Rigid Printed Circuit Board Assembly, which means quantity is big and need do big production assembly. For production PCB assembly job, the SMT assembly would all by machine and would do IPQC for checking the first sample quality to ensure the SMT line is reliable. Zhongfeng would manufacture the rigid PCB boards follow the design file, source the components follow the BOM file and do the PCB assembly job follow the assembly drawing and the pick&place file. After PCB assembly done, the components would be mounted on the PCB boards tightly and connected each other through the copper circuits. We call such board as PCBA board or mass PCBA board.

With our 15years professional experience, we are available for all types of PCB assembly service from prototype to mass production, available for 01005, 0201, 0.3mm BGA, 0.3mm QFP.