Han's Laser, one of the world's largest suppliers of laser equipment. At the end of 2010, the company officially launched the LED chip dicing machine, although the pace is relatively late compared with domestic counterparts, but it does not affect its ambition in this field.

"My vision is to use Dazu Laser as the mainstream supplier of LED chip dicing machine in three years." Yin Jiangang, general manager of the Dazu Laser Professional Industry Development Division, expressed confidence to the reporter.

In recent years, Han's laser has been shot four times in a row, and has quickly rushed into the LED industry by means of mergers and acquisitions, completing the industrial chain layout from LED packaging equipment, packaging and applications. Will the future Han's laser enter the field of LED upstream epitaxial chips in the same way? As a leading company in domestic laser equipment, what are the advantages and characteristics of Dazu Laser? In terms of LED equipment, what kind of layout and planning will the company have? With these questions, the journalist visited the Han nationality laser and had a face-to-face exchange with Yin Jiangang. 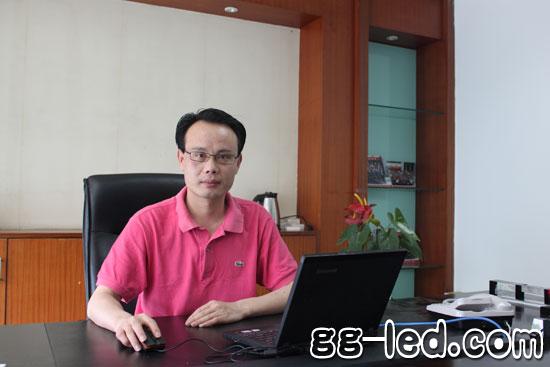 
Striving to be an expert in the LED industry

High-tech LED: Han's laser is said to be the leader in China's laser equipment industry. What do you think of being a leading company and what kind of vision and strategy?

Yin Jiangang: Gao Yunfeng, the chairman of our company, stressed that it is necessary to look at the future with a future perspective. Mastering the needs of emerging markets is the most important factor in the company's development.

As a laser equipment industry, we require equipment to be stable, and then continue to improve to meet the requirements of the industry's continuous development, while guiding the industry to continuously improve the process and reduce customer production costs.

High- tech LED: There are three ways to develop the LED industry. One is to seek strategic alliances; the other is through mergers and acquisitions; the third is to develop and produce. How do you think about these three ways? At present, Dazu Laser mainly arranges the LED industry chain through mergers and acquisitions. Will it use other methods in the future? Will the company extend to the upstream of the LED in the future to achieve the purpose of arranging the entire industry chain?

Yin Jiangang: The historical background and scale determine that each company's way of developing the LED industry will be different. Han's laser has achieved good results in the field of laser processing equipment, but it is quite strange to the LED industry, so it mainly adopts the M&A method to lay out the LED industry. chain.

Many people have previously speculated whether the Han nationality laser will extend to the upstream industry chain, but at present we do not have investment plans in this area.

High-tech LED: When did Dazu Laser begin to get involved in the production and manufacture of LED chip dicing machines? What kind of opportunity is for the Han family laser to cross the LED equipment industry?

Yin Jiangang: In recent years, the company has basically completed large-scale investment in the field of laser processing equipment. Now that the production capacity and marketing network are maturing, the company plans to seek new business growth points in other fields. The new energy industry has adapted to the historical trends and trends of low-carbon development and green development, and the LED industry is breeding a huge market space. The company seized the opportunity to make strategic adjustments, added special equipment to the original industrial laser processing equipment, and determined to use new energy and new light sources as the focus.

As a leader in the domestic laser application industry, Dazu Laser has been committed to the development of laser applications. In the past, the semiconductor chip process was basically a monopoly of foreign equipment. Based on the full investigation of products and markets, Han's laser officially launched the research and development of LED chip dicing machine equipment in 2007. The series has been updated to the fourth generation and officially launched at the end of last year.

High-tech LED: What types of LED chip dicing machines are currently available for Dazu Laser? What are the advantages and features of the Han's laser equipment compared to other equipment products on the market?

The industrial advantages of Dazu Laser are very obvious. First, there are hundreds of people in our R&D team. Product development can focus on concentration, breakthrough, and continuous improvement over the long term. Because our company has this advantage, our company can invest a lot of resources to support our research and development, and some high-end equipment will be developed one after another, such as stealth cutting, laser stripping and other equipment. . Second, the company's sales ability is very strong, the company has more than 100 offices in China, 9 branches, network sales system throughout the country, very close to the customer, the customer's needs can be timely and meticulous understanding.

The third is that the company's after-sales service is very good, and can provide timely and meticulous professional services. After-sales service has more than 100 service organizations throughout the country, each with professional product technical service personnel. Domestic LED companies pay more attention to services when purchasing equipment. Although the equipment abroad is stable, once the problem is very low, many customers can't accept it. This virtually provides a certain space for domestic equipment manufacturers.

High-tech LED: How do you think about the localization of equipment?

Yin Jiangang: In the past, LED equipment, including laser scribing machines, has been monopolized by European and American companies. I personally believe that with the continuous improvement of the cost performance of domestically produced equipment, domestic LED equipment will gradually replace imported equipment, which will be a long-term trend. Han's laser will continue to innovate and improve its core competitiveness.

The dicing machine became a mainstream supplier for three years

High-tech LED: What are the current customers of the dicing machine? What are the established goals in this business?

Yin Jiangang: At present, the companies that purchase our equipment include Hualei, Sanan Optoelectronics, Huacan , Dalian Luming, Orende, Jiangxi Lianchuang, etc. There are 20 to 30 companies that have already tried our equipment. Our dicing machine has made tremendous progress and hopes to have a large increase in the domestic market share this year.

I hope to become the mainstream supplier of LED chip dicing machine in three years!

High-tech LED: What kind of position will the LED dicing machine equipment occupy in the company's main business in the future?

Yin Jiangang: There is no doubt that the LED equipment business has become the focus of the growth of the Han family laser business. With the continuous enrichment of the company's LED equipment product line, the continuous improvement of product performance, and the gradual expansion of the LED market demand, the LED business will become a major part of the company's business.