The duty cycle depends not only on the arrangement method of the wires, but also on the manufacturing method of the entire coil. Previously, the method of increasing the duty ratio has been split core method. The split inner core is an inner core manufactured by dividing the inner core of the stator into an annular circumferential portion and a coil portion. This is the mainstream core used in home appliances, but EVs are generally not used. 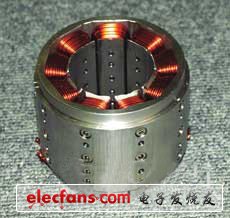 Japan Nite Engineering Co., Ltd. has developed a winding machine that can increase the duty cycle without using a split inner core for EV motors (Figure 4).

Different from the actual winding direction, the ring-shaped circumferential part of the stator is located below, and the inner core used to wind the coil extends upwards, and the coil is wound horizontally here (Figure 5). The tip of the nozzle will fall to the position where it is being wound. If you want to wind up neatly, this is the correct method. Since there is extra space at the beginning of winding, there will be no problem even if the nozzle passes through the "valley" between the inner core and the adjacent inner core, but in the end, a gap needs to be left for the nozzle to pass. This gap will be left on the product, causing the duty cycle to decrease.

When split cores are used, the coil needs to be wound first and then joined (Figure 6). When winding, the coils are scattered, so there is no need to worry about touching the adjacent coils, and there is no need to reserve space for the nozzle. This will definitely increase the duty cycle. 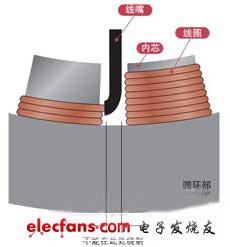 There needs to be space between the coil and the coil. 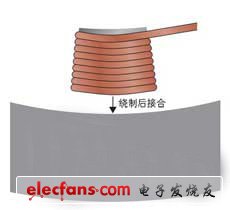 The coils are wound one by one and then joined together, so there is no need to reserve space for the nozzle. 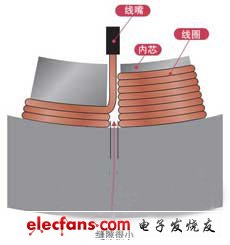 Figure 7: Winding method of the winding machine being developed by NIT Engineering

The nozzle cannot enter between the coils. 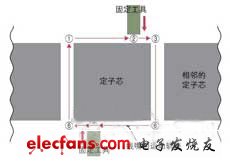 Figure 8: Top view of the coil of Figure 7 (looking down from the center of the motor)

Only between â‘¢ to â‘£ and â‘¥ to â‘ , the thread nozzle can be pulled up into the air and passed through.

In order to avoid the use of split cores, Ritek Engineering Co., Ltd. chose a wire-nozzle winding machine. First, wind the wire with the nozzle as usual. When winding to the limit of the movement of the nozzle, the mode will be changed. It becomes a mode that the wire nozzle does not descend to the trough position between the coils, but supplies the wires from above (Figure 7).

When looking at the coil from above (Figure 8), there is a problematic "valley" between â‘¢ and â‘£, â‘¥ and â‘ , while the other positions, â‘  to â‘¢, â‘£ to â‘¥, are empty "hills". It will only push the nozzle to a high position when passing through the "trough", and will reduce the nozzle to the height where the wire needs to be supplied at other times.

Pushing the nozzle to a high position will result in inaccurate positioning of the wire. To prevent this, you can use a fixing tool to fix the wire on the inner core before the nozzle rises, after it passes the position of â‘¡ and â‘¤, to prevent it from moving up and down.

Take a deep breath, close your eyes, the world has the freshest oxygen ... Yu Quan's "Deep Breath" is well known to us, but as the environmental problems become more and more serious, the haze sky also increases, PM2.5 PM10 and so on Vocabulary has also been mentioned more and more, and air purifiers have quickly become popular on the market with this "air quality" trend. Along with this, the air-clean brand has sprung up, and various technologies are dazzling. Which ones are indeed effective and which are just tasteless propaganda? How does the Air Purifier bother us to get rid of pollution? And look at the editors for you.

The air purifier products on the market not only have various functions, but also have prices ranging from thousand yuan to tens of thousands. The pricing of imported products is generally higher than that of domestic brands. Except for the core technology of many brands, the promotion of purification effects is similar, and consumers need to choose according to demand.

The air quality standard of 74 key cities is only 4.1%

According to the data of the press conference held by the State Council Information Office on June 4, according to the new "Ambient Air Quality Standards", the six pollutants SO2, NO2, PM10, PM2.5, CO and O3 were evaluated, 74 new standards In the first phase of monitoring and implementation, the proportion of cities that met the ambient air quality standards was only 4.1%, and the other 256 cities implemented the old air quality standards, and the proportion of cities that met the standards was 69.5%.

According to a report recently released by the China Electronics and Information Industry Development Institute, due to the haze weather, air purifiers have become the most concerned home appliance products, with sales of nearly 2.4 million units nationwide last year, a year-on-year increase of 90.5%; retail The amount reached 5.6 billion yuan, a year-on-year increase of 105.9%.

HEPA filter needs to be replaced in March

The filter of the air purifier is the same as the filter of the water purifier, and it is not effective for a long time. After long-term use, the accumulation of dust on the surface of the filter will also cause the filter to gradually fail. Therefore, when the haze is more serious, the non-washable HEPA filter needs to be replaced every three months.

99% or even 99.99% seems to have become a slogan for many air purifiers on the market. Many brands of products promote their high removal rate of PM2.5 and formaldehyde. In fact, this kind of publicity is more of a kind. The slogan of stealing the concept, the removal rate of 99% is the effect of the material itself on PM2.5 and formaldehyde, not the effect of actually running in space.