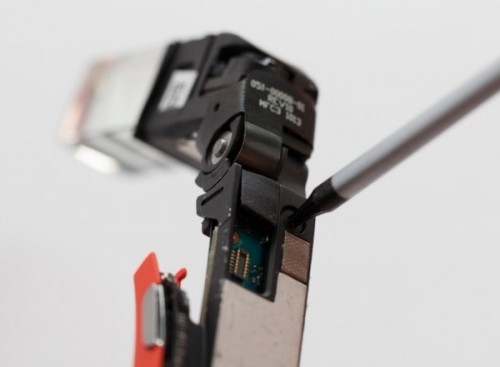 Nowadays, Google Glass is one of the focus products that people pay attention to. After many people get it, they have done many trial reports. From this we can see the placement, specific functions and wearing experience of components such as display and sound on Google Glass. Through Googleâ€™s official documents, we can also know that its camera is 5 million pixels and has 16G storage space. However, there is no clear answer to where Google Glassâ€™s battery is, where the sensor is, and whether the internal connection is tight. . To this end, someone has recently done something extraordinary - to dismantle Google Glass, to explore its internal structure.

The first step in dismantling Google Glass was to separate its titanium frame from the plastic frame. This is a simple process. Simply remove the Torx T5 screws that connect them. After this step, we can find the user serial number on the titanium frame. The dismantler made an attempt after this step - they connected the projection part of Google Glass with a regular eyeglass to see if it could display properly. The actual result is that the projection effect is very poor because the orientation between the sensor and the ordinary spectacle lens cannot be precisely adjusted. However, Google has said that Google Glass will support ordinary glasses within their plans.

The next step is to go into the real "dismantling" process. The first is to pry the plastic housing around the projection prism and the distance sensor and light sensor will be exposed. After that, you can't find any way to continue to mutilate this tightly wrapped product unless you use some violent meansâ€”cut the shell directly with a tool and then remove the screws that are underneath. This means that once Google Glass is opened it cannot be restored.

After the above step, we can clearly see the internal structure of the entire eyeglasses, first the touchpad on the right side, as shown in the following figure. When the user touches a touch control located near the temple, the sensor transmits a signal to the touch module, and the touch module performs corresponding processing according to the signal. The entire module was manufactured by Synaptics and equipped with a Synaptics T1320A chip. I checked this and it seems that Xiaomi uses the same chip.

Then look at the core part - the dark green motherboard. It contains a radio frequency wireless communication module, connectors, integrated circuits, connection lines and a piece of copper piece that reads "a GOOGLE[X]production". And its back is attached to the thermal pad, flip it over, we can see the core components of Google Glass - Texas Instruments OMAP4430 processor, SanDisk's 16GB flash memory and Elpida memory, there are some RF circuits and MMCX . They are connected to the module near the ear.

In order to evenly distribute the weight of the entire glasses, Google Glass chose to put the battery near the ear, and still open the shell by violent means. We can see a lithium battery with a capacity of about 570 milliamps. The speaker is placed next to the battery.

The last big piece is the display component that starts to be set aside. It is also the most complicated and precise structure in Google Glass. It is connected to the motherboard through several methods such as connecting lines and copper. In short, it is very difficult. Demolition. In this module, in addition to all people can see the display prism for imaging, there is also a very small display module inside, and a camera with the same size as an ordinary smart phone. The camera and display are connected to the CPU separately.