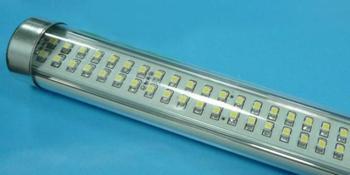 According to relevant statistics, the prices of LED fluorescent tubes in China continued to decline in the first quarter of 2013, and the fluctuations were more volatile. Compared with 2012Q4, the average price of LED fluorescent lamps decreased by 12% in 2013Q1.

â— Price: The price data involved is the average factory price, and the price data does not include the special product data launched by the company.

The middle finger light efficiency is 75~90lm/w. The warranty is about 2~3 years. The light source mainly uses the domestic and foreign manufacturing enterprises in China; the high-end finger light effect is above 90lm/w, and the warranty is more than 3 years, and mainly Export-oriented, light sources mainly use imported and foreign-funded products produced in Chinese companies.

Price continued to fall in the first quarter

Although the demand for the lighting market showed a rapid growth in the first quarter, the oversupply phenomenon was evident and the average price of LED fluorescent tubes fell by more than 10%.

In the first quarter of 2013, the decline in the price of LED fluorescent tubes in the Chinese mainland market fluctuated considerably, with an average decrease of around 9-14%.

The decline in the second quarter is still relatively large

In the first quarter of 2013, China's white LED chips showed two major trends of slower price reduction and tighter demand for white LED chips, which constrained the price of LED lighting sources to continue to drop sharply, which is conducive to the price stability of LED fluorescent tubes.

Affected by the stable price reduction of LED lighting sources and accessories for lighting fixtures, the decline in the price of LED fluorescent tubes in China will decrease from season to season.

Wall Mounted LED Pool Light is a kind of Underwater Lighting which uses LED as the light source and consists of red, green and blue mixed colors. At the same time, the wall-mounted pool lights are colorful, and the local light and background light emitted will form an elegant ambient light, adding a sense of romance and improving people's emotions. Moreover,Wall Mounted LED Pool Light has the characteristics of energy saving, high light efficiency and long life. So it is the perfect choice for fountains, theme parks, exhibitions, commercial and artistic lighting.