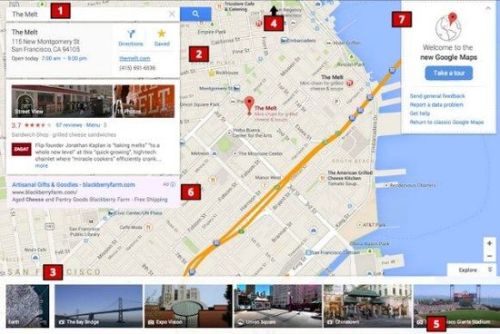 According to foreign media reports, according to the unofficial website Google Operating System, Google will redesign the interface of Google Maps. The new version may be launched at the I/O Developer Conference.

The Google OS website released two Google Maps images on Tuesday to show the new look of the service. The picture shows that the traditional sidebar and navigation buttons of Google Maps have been canceled, and the interactive big map itself has been highlighted more. Positional data, pictures, business evaluations, and other relevant information have appeared on a series of cards on the top left of the screen. The new map will also adopt new colors and icons. Another potential change is that search results may be filtered based on user Google+ circlesâ€™ recommendations.

Google has been adjusting its map service, adding new features such as country-specific details, real-time traffic information and high-definition images. However, Google Maps has not been revised for a long time.

The â€œGoogle OSâ€ website did not disclose when the new interface will be launched, but it pointed out that the Google I/O Developer Conference will be held next week and it will be a great opportunity to announce the above map changes.